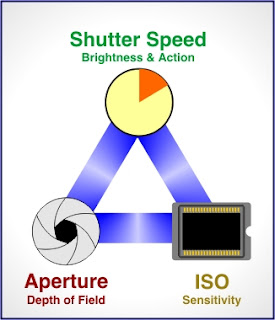 In our previous posts we talked about how an exposure value (Ev) is calculated using several numerical values; they are aperture value (Av), shutter speed (Tv) and ISO based on a predetermined luminance value (Lv). We also discussed stops and how cumulatively they combine to create a properly exposed image.

The article also introduced the concept of an exposure value table and how we can calculate corresponding shutter speed and aperture combinations from it. But how do these combinations relate to each other? That is where understanding the exposure triangle can be of benefit.

The illustration at right gives a hint on how interconnected these elements are to each other and what aspect of photography each element influences. So let's take a closer look at our exposure triangle.

We started our last post with an explanation of how a camera captures an image. To reiterate, a camera records an image by exposing film or digital sensor to light entering through a lens for a predetermined length of time. The size of the opening in a lens determines the quantitative amount of light that enters the tube. This opening is known as aperture or more comonly as the f-stop. The length of time the film or sensor is exposed to the light is known as the exposure time or length of exposure or more simply as shutter speed.

The only thing we did not cover in detail was ISO. As most exposure tables default to an ISO of 100, I glossed over that part with the goal of keeping things simple. ISO refers to the receptive sensitivity of film or digital sensor to the light striking it. The higher the number the more sensitive it is to light.

We now have all the parts of our exposure triangle; aperture, shutter speed, ISO and luminance value. "But a triangle has three sides. You just listed four elements," you say. When we discuss exposure we are  actually talking about solving a problem. The problem is how to capture the light that we see by adjusting the three elements found on your camera. The fourth element is the light itself. In order for the light to enter into our calculation it needs to be converted into a value. This value is called an exposure value (Ev).

For this article we will be focusing on available natural light for simplicity as this is the most commonly found light. Since we have no real control of our natural light1 we have to concentrate on those element we can change; aperture, shutter speed and ISO. 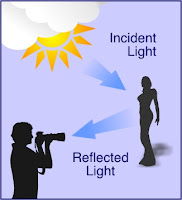 Incident light is light that falls onto your subject from a light source (sun, light bulb, etc.). That light hits and reflects from the subject to the camera. The reflected light enters your camera's lens and is read by the meter. That reading is calculated, converted to an exposure value and when combined with your camera's settings (aperture, shutter speed and ISO) it is displayed in the form of a numerical graph. 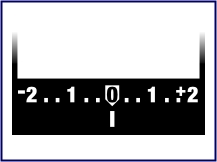 The graph shown here (for illustration) represents a range of four f-stops, two stops underexposed and two stops overexposed. Remember, proper exposure is attained when the exposure calculation is "0" (as show at right). NOTE: different cameras may have different metering scales and yours may differ from what is shown. For example, Nikon and Canon cameras reverse their scales but the principle is the same. Negative is underexposure and positive is overexposure. The dots represent additional adjustments in 1/3 stops for fine tuning.

To obtain proper exposure you need to adjust one or more of the three elements (aperture, shutter speed, ISO) until the exposure indicator is centered on "0". To activate your meter simply press your shutter button half way. Your meter should be displayed in the view finder depending on our camera's features (check your instruction manual). The problem that arises is knowing which element to adjust and that's a common question I get asked all the time. Let's break down what each of these elements do.

ISO for Image Sensor Sensitivity
This is an acronym for Industry Standards Organization which is in fact a photo standard set by the International Organization for Standards (ISO.org). ISO is a network of the national standards institutes of 163 countries, one member per country, with a Central Secretariat in Geneva, Switzerland, that coordinates the standardization system.

For us photographers, ISO stands for the sensitivity value assigned to our camera's photovoltaic sensor as it collects light and converts it into electrical signals. The camera's computer then converts those signals into data we are able to read with imaging software. Some cameras can go as low as ISO 50 or 25 but ISO 100 and 200 are more the norm. As the number grows higher the sensitivity increases making low light image capture more feasible.

Each increase in ISO is a doubling of sensitivity; 50, 100, 200, 400, 800, etc. Each step is termed a stop and it is this standardization that makes calculating our exposure values easier (see "Understanding exposure - stops"). So remember, higher ISO equals more light sensitivity in darker situations.

APERTURE for Depth of Field
Aperture refers to the size of the opening in a lens that allows light to enter the lens. The type, use, focal length and quality of the lens dictates the range and number of stops the lens can open to. As with ISO above, aperture stops double the amount of light with each increase in size opening.

SHUTTER SPEED for Action Speed
The last part of our exposure trifecta is shutter speed. This controls how quickly the camera's shutter opens and closes to record an image on the film or sensor. The slower the speed the more light it records. The trick is to balance the amount of light the camera allows in without causing blurring due to camera movement or movement of the subject. Once you understand how shutter speed affects how an image is recorded, you can cause some very creative effects by controlling time.

1. This is a simplification. We can actually modify available light by moving our subject (if possible) or adding modifiers. That will be for another post.