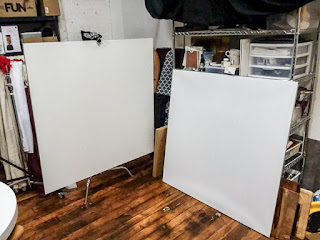 One of the most commonly used tools in my photographic arsenal is the all purpose diffusion screen. I use it to soften light, create gradients and light fields or as a background. One of my current favorites is a metal framed 4' x 4' foot scrim with thick white artificial silk made by Matthews. I didn't think I would use it so much, being so large, but having borrowed it from a friend I really came to love it. The downside for me is the price. At just over $100 I couldn't really justify the cost, considering I want at least two of them. Time for a DIY alternative.

Diffusers, in general, are easy to make and there are more than a few alternatives out there, from simply hanging material on a pole to making cardboard, wood and metal frames with diffusion material stretched across. When it comes to making my own DIY equipment, however, I have a couple of criteria I need to meet. My DIY needs to at least look somewhat professional and it needs to be sturdy enough to hold up to moderate abuse. Because I often have clients in the studio while working I don't want my equipment to look shabby or unprofessional and because I am usually the only one using it, the equipment doesn't have to be over engineered.

In the past I have made a variety of scrims. I have several foam core framed and a wooden framed scrim that I use all the time but they are all small. Then there are the collapsible 5in1 reflectors with diffusion scrims but we all know how flexible they can be. Not suitable for the studio product work I do. Time for some large ones. 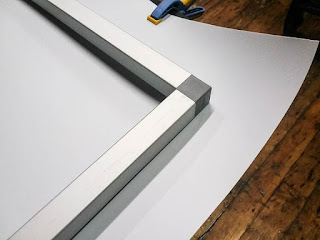 Taking guidance from some of the commercially available diffusers on the market I opted to go with an aluminum square tube frame with a vinyl diffusion material. This would afford me the quality, durability and washability needed for studio use.

There are several companies offering square tubing but I ended up going with a small company out of Michigan called ESTO Connectors. From their website, "ESTO Connectors is a manufacturer and supplier of the molded nylon connectors and square aluminum extrusions." Looking to keep things as light as possible I ended up ordering 3/4 inch (19mm) square aluminum tubing with the appropriate nylon plastic corner connectors. Since I wanted to make two scrims I purchased eight lengths at 46.5 inches. With the corners at .75 inch each it would give me a final measurement of 48 inches or four feet by four feet.

For diffusion I went with a product that many people seem to recommend, heavy weigth Translum, a flexible styrene diffusion film. I ended up purchasing a 54"x18' roll from B&H's used department (of all places) for almost $20 cheaper than regular price. When I received the roll I could tell it had some minor damage to one end of the roll and was likely the reason for it being in the used pile. As I was going to be trimming it down a damaged edge didn't matter to me. I was just glad for the discount. At 18 feet I can even get four large diffuser from that one roll. A nice bargain. 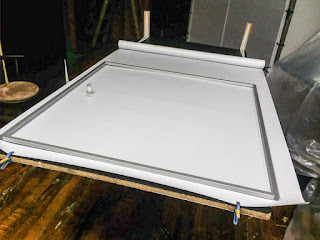 Since I ordered the tubing pre cut to length all I had to do was press fit the corners in and the frame assembly was done. I then used 3/4" Scotch double sided tape (not the foam type) and put a strip along one side of the frame. You will need two rolls of double stick tape as there is not enough liner length on one roll for two panels.

For the next section I needed a large surface to unroll at least five feet of the Translum. I used a 4' x 8' bounce panel I put up on stilts as a makeshift table and secured on end of the Translum to the edge with 'A' clamps to prevent it from unrolling. This also ensured that the film would lie flat while I pressed the frame in place.

NOTE: The Translum has one side that is smooth and one side with texture. If it matters to you which side faces outward make sure you unroll the film with the proper side facing down. 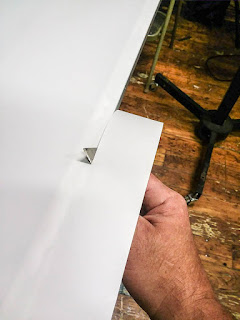 Being careful not to accidentally stick the frame prematurely, I positioned it at the end of the roll and laid it onto the film. Using moderate pressure I went along the tube and pressed it into the film. I then took a pair of scissors and cut across the roll so I could flip the entire frame over. At this point I needed to really press along the frame in order to remove air gaps and ensure the film made good contact with the double stick tape.

Once I felt the entire edge had a good bond I used a razor knife to trim out the excess material from around the outside of the frame. The diffusion material cuts easily and using the metal tubing as my guide I had the whole frame trimmed out in less than a minute. At this time I took one final pass along the edge to double check the tape adhered to the film properly.

The whole process took me a little over half hour to fabricate two large 4' x 4' diffusion panels. I now have plenty of diffusion material left to use as additional diffusion or, what I plan on doing, to make additional aluminum framed panels. My next set will be smaller 2' x 3' panels. 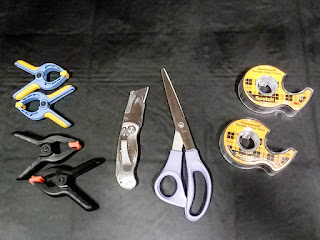 Overall I was able to make two large professional looking scrims for about the price of one commercially available scrim. Plus I have plenty of material left for additional scrims. Here is a breakdown of the cost;

As for tools, this image shows everything I needed to make the scrims. The razor knife, scissors and clamps I already had so there was no added expense there. My next purchase will be a couple of clamps so I can use these scrims on a grip head with my C-stands. I'm looking at the Python Clamp with 5/8" baby pin by 9.Solutions.

Let me know what you think about this DIY project in the comments section.