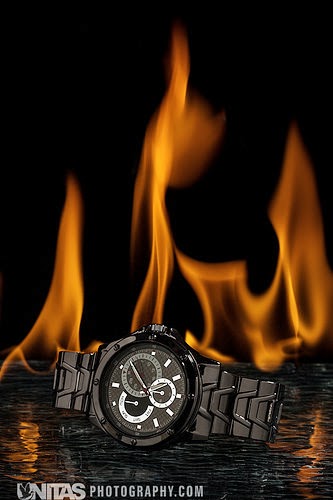 For a while I have been wanting to do some studio setups that play with elements; water, fire, earth, air. An opportunity to play with fire came up and this is the results of that photo shoot. As you can see it is pretty impressive but when I describe the behind the scene setup you will be amazed at how simple this setup really is.

It is so simple, in fact, that the image at right was all done in-camera. While the watch looks like it is on fire, the flames actually sit a few inches behind the watch. No watches were injured in the making of this tutorial.

To achieve this look requires balancing the natural light of the flame with the strobe lighting that illuminates the product. Since this is a product shot with a little artistic license I did not have to worry about achieving balance between the flame color and the introduced light. In this case the color temperature of the flash was a lot cooler than that of the flame. By adjusting for the flash it pushes the flame further into the yellows, and that was alright by me.

First order of concern is safety. Can't have anything that can catch on fire near the set. A small kitchen fire extinguisher is handy to keep within arm's reach. Any flammable material such as the cloth from soft boxes and foam core reflectors need to be kept out of reach of the flames too. Since the flame is relatively small, keeping it under control is not difficult. Just use common sense and you won't have to file an insurance claim.

My original thought was to have the flame reflected in a pool of water or water droplets under the watch. Since this is a cheap watch and not very waterproof, I opted to leave out the water part. I did, however, have this really great sheet of water glass from a previous shoot. Problem solved and most likely avoided a few headaches in the process.

I set up the watch on the table and worked at getting the watch properly lit. A couple of white foam core boards for tonal transitions and I was good to go. I just had to make sure I had enough glass space behind the watch for the fire. With this setup, I had very little to worry with the flames. Lighter fluid is a perfect solution as it is the vapors that create the flames. That meant I could drip a line of fluid right onto the glass and ignite it without damaging my surface. With the small amount of fluid I was using I could easily get about a minute or two of burn time before the fire went out. You'd be surprised at how many frames you can fire off in that short amount of time.

The best flame came from the very beginning of the burn. About half way through the burn they became noticeably smaller and more plain looking. I also noticed that the pattern across the background became uneven, depending on how the fluid was distributed on the glass. A thinner line of fluid created shorter flames and went out faster than a bigger pool of fluid. That created an uneven distribution of high and low flames. Ideally I was looking for higher flames in the center and shorter ones on the outer edges.

For the best possible look it is ideal to take a variety of flames from several shots and composite them together in a photo editor. That allows you to selectively place the flames where needed. But since I was looking for a quick challenge, I opted to keep this all as a single exposure shot. Typical post processing for spot and blemish removal, levels and other standard edits was done in Photoshop. I also worked on reducing the glare off the watch face in order to bring out the details. Otherwise, this is pretty much straight out of the camera. 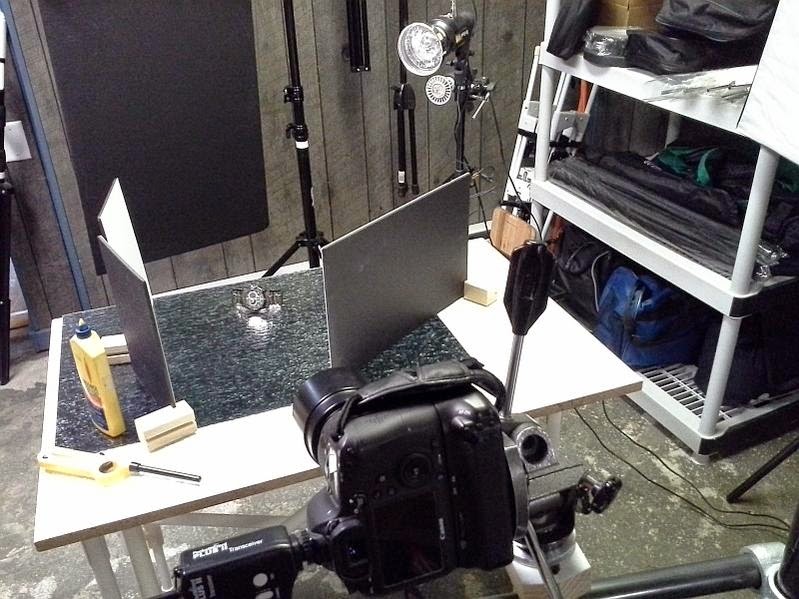 The setup, seen here at left, is rather simplistic. A single strobe at camera right (and behind the product) shooting into several white bounce cards. Black foam board for a background with a piece of black foam board under the water glass on the table. The black is used to showcase the color of the flames.

To avoid stray specular highlights, the final image was shot with the main lights off in the room. Nothing like having a great shot ruined by having the overhead fluorescents reflected in the glass and metal of the product.

Hopefully this gives you some ideas for introducing flames into your product shoot. Just remember to keep it safe.