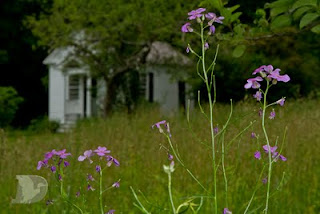 We recently made a trip to the gorgeous Bellamy-Ferriday House and Gardens in Bethlehem, CT for a photo shoot. While we were supposed to have a model, we ended up without one and were left to our own devices. So as the saying goes, "when life hands you lemons, make lemonade."

On the property there is this cute little one room shed set off at the edge of an overgrown field with a quaint little path mowed through the grass leading to it. I knew I wanted to shoot it and as I walked around I spotted a view that I wanted to explore. It included some wildflowers and a foreground shot of the field, using the shed in the background.
The day had begun gorgeously enough, slightly overcast making for some beautiful soft wrap-around light. As the day progressed the clouds became fluffier and the sun brighter. This presented a problem to my shot. The shed was in slight shadow from the tree line it was against, the field was in full sun while the wildflowers were in shade from a tree just to the right. An additional problem that became obvious on my first exposure was that the spindly nature of the stems meant I really needed some form of separation of the subject from the background. I metered for the open area of the field and shed, knowing I had more control over the light on the wildflowers. Here's the result; 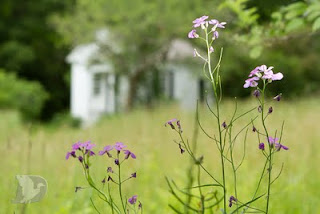 My first choice was to use depth of field to separate my subject from the background. Fundamental thinking I thought. I set my aperture to f4.5 to keep a shallow depth of field and metered for the scene. I also set my flash at camera right to put some fill light onto the flowers to bring them out of the shadow of the tree. When I pre-viewed my test shot on my screen I was not very happy with the results. First I thought the exposure was too bright. The flowers became lost against the bright background. Secondly, the focus was just too soft. After all, part of the charm was the shed and as you can see, the focus is so blurry you really can't make out any of the detail. 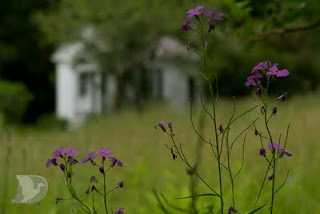 I went back to the basics and tackled exposure first. I began by turning off my flash and metering for the brightness of the field. I took another exposure and previewed it. Note that the wildflowers are now dark and barely noticeable. I knew I would be bringing this detail out with off-camera flash once I had my composition looking right. I wasn't too worried about that at this point. What was more important was darkening that background to contrast with our wildflowers when lit by the flash. In this shot I was happy with the lighting on the background but still not happy with the depth of field. 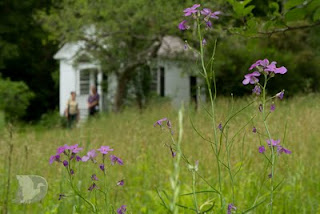 I changed my aperture to f11, metered again and took another test shot. Now I have a depth of field I am happy with. You can make out the shed quite well while still being soft and pushed to the background. However as a result of changing my settings, my light values were affected. I gained a little too much light causing me to loose some of that contrast between foreground and background. Easy fix, just readjust my shutter speed to cut some of the background light down. With that in mind I felt I was ready to make my final image. I adjusted my shutter speed, set up the flash at 1/4 power and fired off another exposure. 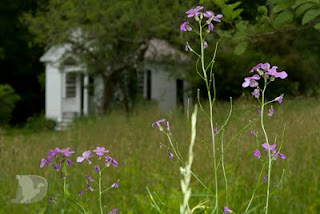 Nice, but... what's this? Where did that brightly lit seedy grass come from? That wasn't there before! Looking back I realized that it had been there all the time but I just hadn't noticed it. Easy fix, simply move it out of the way and shoot again. I touched my shutter speed up another third stop and fired again. Results! The final image at the top of the page was the results of all this adjusting and manipulating.

As you can see from my example, you can manipulate your light levels according to your needs. In this case I needed to separate the foreground from my background. Since I knew the foreground was going to be well lit that meant that my background would need to be darker to help set the flowers off against the background. The foreground light against a darker background, in conjunction with the depth of field, helps bring the viewer's attention to the main subject. Keeping the secondary subject readable gives the scene a sense of location and helps fill in the 'story' to the image.

Go ahead and experiment using your off-camera flash to isolate your subject from the background. Keep in mind that you may not get lucky in your first shot with the flash as I did above. If you fire of an exposure with your flash and notice it's too bright or too dark, adjust your flash setting accordingly. Or simply move the flash toward or away to adjust the levels.

Have fun and experiment.