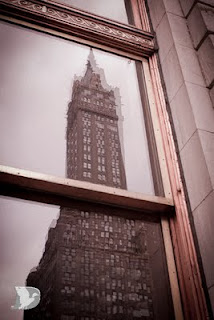 Living so close to New York City, I have made numerous trips to the city for one reason or another. Sometimes I have gone with a camera, but usually I am with non-photographers so the camera stays home. However, I recently had an opportunity to do an all-day photo workshop with local pro photographer Bob Harrington.

It was a small group and we had a gorgeous model to work with throughout the day. Even though we had a ready-made subject, we found ourselves aiming lenses elsewhere. After all, we were in 'the city that never sleeps'. It wasn't until a few days after that I made an observation that might pertain to other new photographers just learning. Of all the 'landmark' shots I took in the city, they were all your typical 'tourist' pictures.

Now, I know I have learned a lot over the past year on what and where to shoot, etc. I even know that as a photographer you should strive to take that image that no one else has gotten. After all, every one has that Liberty shot and that Central Park shot and that Empire shot. I KNOW this, yet looking at the photos I took, they were, well, typical. Why?

I thought about it and realized a few things. First, while pros expound on the fact that everyone has taken those same shots year in and year out, I know for sure I haven't. I don't have that Liberty shot I have seen a hundred times. Nor do I have that overdone Empire shot. I realize I WANT those shots. I even feel compelled to purposely take those shots. It's almost like a right of passage. Find them, take them and get them out of the way so that next time you can go for the more artsy/obscure/less traveled angle.

Fortunately I live close enough to the city to know that I will eventually be making my way back to shoot more. Which leads me to my other revelation; having come to the realization that I have fallen into the 'tourist' mode and will do so again in the future, I now know what to look out for the next time. If the next time is a once-in-a-lifetime location, I now have the experience to foresee that I may fall pray to a mediocre shot. Knowing this arms me with the discipline to (hopefully) stop myself from traveling that well worn path and look for one less traveled.

So in conclusion, I will tell you, "take those gloriously overshot tourist pictures." Get them out of the way quickly but don't forget to discipline yourself enough to break away from the mundane and push yourself for something greater. It isn't easy and you will need to make it a conscious effort at first. But as with everything else, practice makes perfect.