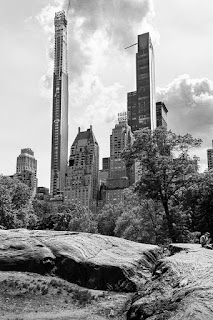 A good friend, and fellow photographer, Letif Belcher (of letif.b.photo on Instagram) was in my studio recently doing some headshots for a young female actress client of his. The topic of New York came up and he mentioned wanting to take the trip in for some street photography. I love getting into the city with my camera and mentioned to him that it's been a while since I've been there. A couple days later and we had a trip planned to hit Central Park.

Letif and I took the train into Grand Central last Friday and, cameras in hand, headed uptown to the park. As he'd never been there I planned out a few 'must see' spots to hit. Our first stop would be the famous LOVE art installation on the corner of 6th and 55th. Much to my dismay, the sculpture was "out for repair". Off to a bad start.
We entered the park on the South side, across from the Ritz. Once inside we explored a small wooden gazebo structure then headed to Umpire Rock. An impressive example of some of the exposed bedrock that dots Central Park. This particular one was huge and undulating, giving evidence of the intense heat that must have formed it eons ago. As you can see from the above photo, the view of the new skyscrapers being erected is equally impressive.

From there we headed up the Mall towards the famous Bethesda Fountain. If the name isn't familiar you will know it by sight. It's been featured in so many movies it's now iconic New York. 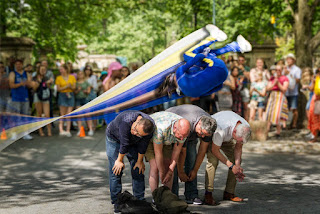 Just above the fountain a group of acrobats/dancers were just setting up for one of their daily street performances. It's a well known group called The Afrobats, a conjugation of Afro and acrobats. These guys have been a local staple at the park for many years. I recall seeing them in the past but never got the chance to photograph them as I did this day. Here is one of the many shots I took and later manipulated to better express their energy.

The interesting thing about my day in Central Park with Letif was that I was enjoying the day, the walk and the company more than I was interested in taking photos. That's not to say I didn't get any shots. I just wasn't so lost in the viewfinder that the joy of being in the moment was also lost. Sometimes it's better to just be an observer.

The last stop I had planned for the trip into Central Park was to be Belvedere Castle. This is another one of those iconic New York locations that is just breathtakingly beautiful. Alas, just like the famous LOVE sculpture, this too was out of commission. The whole area was closed for renovations. Talk about a letdown.

Fortunately it wasn't all a waste. We met a group of young women and Letif got the opportunity to photograph one girl with really gorgeous hair for his calendar project. As for myself... I walked away with this image.

By the end of the day both of us were tired, leg sore from walking and looking forward to the return trip home. I want to thank Letif for a very enjoyable time. If you get the chance, follow him on Facebook at @BelcherDigitalMedia and @rlbelcher. You can also follow his Instagram posts at @letif.b.photo.

I'll also be posting additional images on my own instagram page at @unitasphotography.