December 18, 2018
In this article I am reprinting a critique I published on photoMENTORIS.com regarding the painting entitled 'Census at Bethlehem' by famed painter Pieter Bruegel, who was born in what is now the Netherlands in the 1520s.


The first point I would like to say is that you first need to consider both the medium and the time frame of this painting. Being a painting, the artist has a certain advantage of being able to carefully direct the large amount of content presented to the viewer, unlike, say, a photo of opportunity of the street photographer (I strongly believe Pieter would have been the 'street photographer' of his time). Even a studio photographer, with the luxury of space and time, would have a hard time justifying creating such a complex composition. Where you would see this type of visual composition today would be in modern cinema. In particular, period pieces that rely on background elements to "sell the era".

Secondly, the era in which this was created was a much slower time. People had the luxury of spending very long periods of time to contemplate a painting, unlike the average 15 seconds an image has to grab your attention in social media today, though this is an unfair analogy. Visual appreciation is not what it used to be but because of that time luxury artists imbued their works with a lot of meaning. In this case this is an allegorical reference to a passage from the bible denoting the mandate for a census from Rome. Not to mention that most artists would have created artwork that pandered to their patron. This would obviously sway the content and meaning of their creations.

Taking this painting in reference to modern image making there is a strong lesson in inspiration. In this case Pieter took a passage from the bible and made it his own;


And it came to pass in those days that a decree went out from Caesar Augustus that all the world should be registered... So all went to be registered, everyone to his own city. Joseph also went up from Galilee, out of the city of Nazareth, into Judea, to the city of David, which is called Bethlehem, because he was of the house and lineage of David, to be registered with Mary, his betrothed wife, who was with child. — Luke 2:1-5

With 'Census at Bethlehem' you can see all the elements of this passage clearly represented in a modern (for his time) interpretation. Historically, this is nothing new. Many artists of all types have pulled reference from the bible for inspiration, but what the takeaway here is in the reinterpretation. If ever one has a mental block about what to create... just pull a passage from the bible and reinterpret it photographically. I can see Piet Francke and Dave Chinn getting inspiration from this. :)

The beauty of this painting, for me, is the thematic use of tableau vivants throughout the entire scene. Everywhere you look there are carefully staged scenes of everyday life (snowball fight, chafing the wheat, bringing goods to market) while coalescing into the overall theme of census taking and the pilgrimage of Joseph and Mary into Bethlehem. To be honest, I am not a religious person so I completely missed the titular reference and the obvious depiction of Joseph and Mary at first. 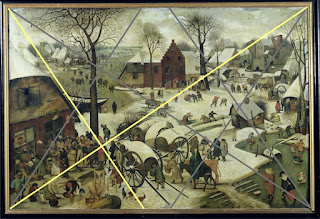 If you are one that has settled on the Rule of Thirds and have not wandered far from that compositional rule you will be hard pressed to analyze how this scene is arranged. There are two very strong compositional elements (rules?) used effectively here; the Dynamic Symmetry and the Gestalt theory of Proximity or Common Region. This is the principle where groups of elements are seen as a whole. In this case, the assembly in front of the census building at lower left is the main focus point because of the mass of grouping and the intersection of points based on Dynamic Symmetry. 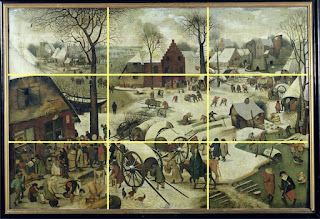 That doesn't mean the Rule of Thirds isn't there. On closer inspection you can clearly see elements purposely conforming to that principle. Take a look at the horizon line created by the row of buildings in the background and the row of travelers making their pilgrimage to the census house at bottom. Then notice the two trees with their strong dark color and vertical placement equidistantly left and right. It's just happens that other rules take precedence. 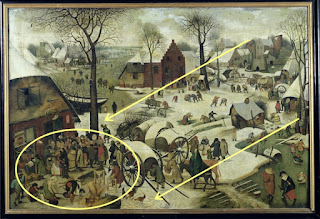 Another Gestalt principle in use is the principle of Contrast. In this image pay close attention to the light area of snow covered ground coming in at a diagonal to the census building. This use of color, along with the carefully placed leading lines within that space, all comes together to pull the eye into the scene, down the path and to the congregation in the lower left corner. 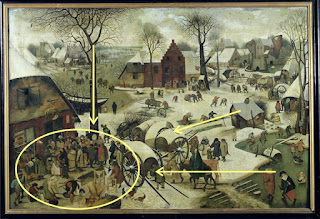 Speaking of leading lines... This entire painting is just riddled with all kinds of leading lines. Some are very obvious, like the trees and the paths, while others are more subtle, like the progression of the travelers leading into the town center or the direction of view from the majority of the people in the scene. 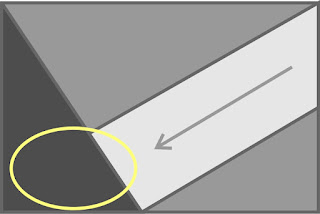 Overall, on first impression the composition can appear as being intangible. Specially if all you know is the basic Rule of Thirds. Hopefully you have now come to understand the brilliance of Pieter's use of complex compositional decisions to direct an otherwise overwhelming scene. This last diagram simplifies the composition and hopefully allows you to see the painting in a new way.