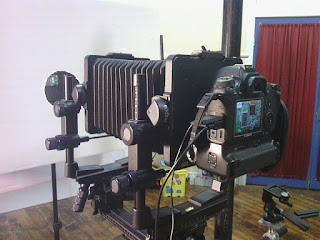 It is not often that people get to really see my DIY tilt/shift camera configuration, but when they do it is usually followed by a variety of questions followed by a glazed look of intimidation. After all, it's not your typical camera setup. Here is a quick rundown of my DIY conversion.

I originally saw this configuration being used by the amazing Alex Koloskov in several of his product photography videos. I was immediately intrigued and amazed at its capabilities. While it seemed like a lot of trouble and expense for a tilt shift lens, specially since there are dSLR TS lenses available, I knew, from experience, this setup had a far superior advantage over the standard TS lenses.

The other plus side was that I could still use it as a large format film camera should I choose to. 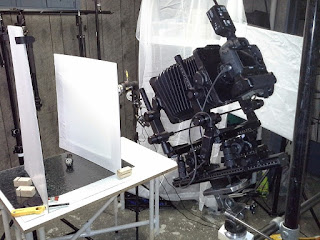 My first step was in finding a suitable large format camera at a reasonable price. I knew Ebay would be my go to source for this. As I was not in any rush I had the luxury of waiting for a good deal, and that is the trick to getting good used equipment at a reasonable price. It also allowed me to become familiar with the different brands and models available.

The one thing I did notice is that the price range for LF cameras were all over the place. Shopping around let me become familiar with pricing trends so that when a good deal did show up I was able to recognize it as such. Before long I had a solid, in new condition, Cambo Legend large format camera with accessories but no lens. Not a big deal. 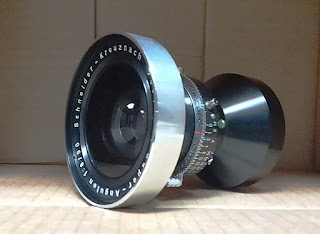 Large format lenses are still being manufactured. Who knew? But there are plenty of them available on the used market. Like the camera, I needed to take my time getting familiar with these lenses as they are not like your typical SLR bayonet mounted counterparts. Specially since I would not be using them in the same traditional manner with my planned configuration. The downside was that if I wanted to keep within budget I could not be too particular.

Before long and for less than the price of one dSLR lens I had acquired three LF lenses. I also bought a variety of lens boards in order to mount the lenses to my camera. All that was left was to manufacture a method of attaching my dSLR to the new camera. 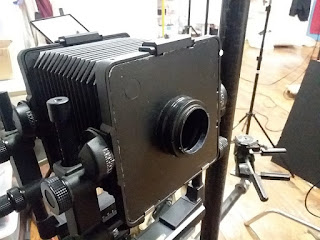 One problem I immediately encountered when trying to figure out how to mount my dSLR to a lens board was the protrusion of the grip. That protrusion did not allow the cameras bayonet mount to be easily accessible. I would need to incorporate some kind of stand off from the lens board. After some searching I found the best solution was with extension tubes. I bought an inexpensive three tube kit made of aluminum for under $20. But how to mount it? I have all kinds of wood working tools in my basement but nothing to work with metal. 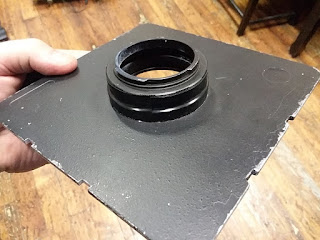 One name above all others came up in my search; SK Grimes, "the Photographer's Machinist" out of Woonsocket, RI. A phone call and a short conversation later I was confident they could do the job and at a far more reasonable cost than I ever imagined. I packed up the lens board and extension tubes to them and a couple weeks later I was ready to go. All I had to do was take a file to the right side of the lens board, cut a couple of notches so I could rotate it 90°, and I was done.

One of the biggest issues I came across is with the lenses. They are meant to be used for larger formats (4x5 in my case) so the image circle is huge. That can be a benefit. The down side was in focal length. As you can imagine, the perceived focal length on a smaller sensor would be greater. My 210mm LF lens now acts like a 600mm lens. On top of that, the focal plane is set further back due to adding the extension tubes to compensate for the dSLR's grip. Because of the bellows and the offset focal plane that also means my aperture values have shifted as well. This makes using the new configuration tricky as I now have to readjust to a new set of rules regarding these lenses. I am still getting used to them.

The other big issue is that some LF lenses aren't as crisp as new lenses. Unfortunately as I am buying used equipment it's not an easy task sifting through what is and what isn't a good lens for this setup. It's all trial and error. The good thing is that if a lens turns out to be a dud I can easily resell it.

Another downside is in the shutter configurations. LF lenses are mounted onto a leaf shutter system. These shutter systems often have a setting that allows the leaf shutter to open and stay open while you compose and focus. This is great because I would be using the dSLR's shutter anyway. Where it's a problem is with shutters that don't have that 'stay open' capability. These shutters rely on the shutter release cable's ability to lock in an open position, something I don't currently have. In these cases I have to manually hold the lens shutter open while I release the dSLR's shutter. A pain but it does have a workaround. Eventually I'll get a manual release cable and make my life easier.

Finally, the weight of this is monstrous. You will need either a heavy duty tripod or a good quality camera stand. There will never be any hand holding of this beast. 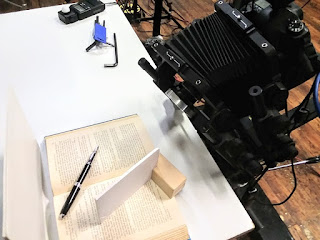 Unlike a TS lens designed for a dSLR that only has lens tilt and shift capabilities, my setup offers tilt, swing, rise & fall and shift on both the front and rear standards. This means if I want to I can adjust the lens only, the body only or both in just about any direction I want. Something definitely not available with a TS lens. The larger image circle also allows me to make greater adjustments on the lens without losing the image or getting heavy vignetting.

So that is a quick rundown on my DIY tilt/shift large format camera rig. I hope you found this useful. I know this isn't for everyone but if you are interested, hopefully this will clue you into some known issues, some suggestions and some resolutions.