June 28, 2015
Color is determined by the light reflecting off an object. It is a physical process with a constant set of values resulting in a predictable conclusion. It is basic physics.

Sir Isaac Newton established many of the basic principles of light through his experimentations with prisms. Simple as it seems today, this toy was instrumental in laying the foundation for particle based physics.

Scientifically that's all well and good but, as an artist, I could care less about particle physics. What I am most interested in is the psychology of color. Psychologically, color has more properties attached to them than mere luminance values, RGB values or even their common names. Sure, you might understand what the numbers 255,0,0 represent or that the term red is the common name for those numbers. Let's face it, we don't go around looking to photograph 255,0,0 or 87,53,64 or 15,8,164 or any other assortment of digital combinations between 0,0,0 and 255,255,255.

The interest in color on a psychological level, rather than an artistic level, is that I want to appeal to viewers on an emotional level. Sure, I can put orange and purple together in an image because they compliment each other. I would much rather place those colors together because they create a sense of tension and drama.
We are emotional creatures. That is why we create things of beauty rather than just function. The stronger a creation connects with our emotions the more powerful, and better received, that creation becomes. In photography we already understand that subject matter is a big part of what makes a great image, but, as you are aware, there are other elements like composition, lighting and... color.

The prism illustration above contains all the colors of the rainbow (full spectrum of visible light) split apart into their respective wavelengths. This is a familiar sight because we have all played with a prism at one point or another. Not only have we seen it when playing with a prism but we have also seen that exact color spread in other areas as well. 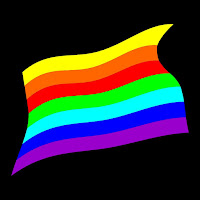 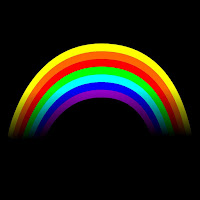 The illustration at left is a stylized representation of a very familiar phenomena found in nature. It is immediately recognizable as a rainbow. When we describe this to someone we use the common name, not a series of numbers. There is also an emotion attached to it (along with folklore and symbolic imagery).

The illustration at right is also the same order of colors but it conveys a totally different emotion and has a completely different set of symbolism attached to it. For some the emotions can be very strong in one direction or another and has moved people to take action in both positive and negative ways. That's how strong emotions can be. However, on the surface, stripping away all emotional connections, these are just colors of the visible spectrum arranged in a natural order. 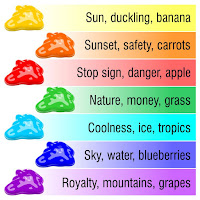 Attaching emotion to colors is nothing new. Advertising agencies have understood this for decades. So have home decorators, architects, painters and toy manufacturers. We ourselves have a rather large vocabulary of color identifiers that we use on a daily level and that vocabulary changes from region to region and country to country.

Along with emotions, colors have flavors, smells and symbols attached to them. The overly simplified list at left is just the tip of the iceberg. Here is a simple exercise; Look at a photograph if a cup of coffee. Actually, look at several photos since coffee comes in a variety of preparations, everything from black to light and sweet. As you are looking at the photos you can imagine the taste and smell of coffee. You can also picture the color of coffee. You can smell and taste the color. 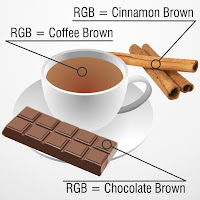 Funny thing is that the color coffee is a very suggestive hue (like actual coffee with light cream). Of course there are derivatives such as dark blend, mocha and latte, each having their own specific hue. Coffee color is a really light, warm brown. You can see the influence of yellow in it which is a completely different hue than, say, milk chocolate or cinnamon.

You can see just from this small example that color projects far more than a particular hue. As I mentioned, you already have a catalog of color associations. Don't believe me? Try this little test; what colors feels hot and cold? What color warns to yield? How about stop and go? How about the color of healthcare and ecology? We can go on but I think you get the meaning. Colors are more than the sum of its electromagnetic densities and spectral incidence. 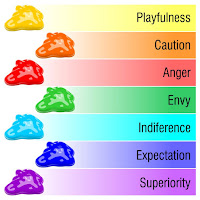 The above examples, as obvious as it seems, play on our senses and our memories. As I mentioned earlier great photos touch the viewer on an emotional level. There are many color that have a clear association with emotions, some even becoming part of our vernacular. Green with _____. Turning ____ with expectation. So angry you can see ____. These are strong associations and can be used to enforce a specific feeling or emotion in your images.

Manipulating colors to enforce or convey an emotion can be achieved in many number of ways. A happy accident occurring naturally at the moment the photo is taken (a beautiful golden sunset) or by design where each element is carefully chosen (a fashion shoot for a major ad campaign). It can also be deliberately modified in post processing to achieve or enhance a certain look.

Experienced portrait photographers guide their clients about wearing certain colors to a photo shoot. They also make very specific choices about backgrounds. These pre production choices are not based on current fashion trends but on carefully selecting a color palette that makes their client look their best in the final print.


While not all photographers have the luxury of controlling their palette in their pre production setup other techniques can also be used. Post production can be used to adjust your image after the fact.

Some images benefit from a warmer look while others from a cooler look. Landscape scenes can be enhanced by adjusting colors through saturation and vibrancy adjustments, white balance and split toning among other techniques. Fashion images can be radically manipulate, including completely changing the color of clothing and backgrounds.

As you advance in your skills you will start to become aware of color interplay, color influences and how and when you can manipulate them to your benefit. With pre visualization many critical choices can be done in pre production. If it can't be done before the shoot there are many ways to change things in post production. The takeaway is that colors have strong emotional connections that can be used to your advantage. Learn to utilize color and you'll add another tool to your repertoire.

Hopefully this article has given you a new perspective on how to look at a scene. Let me know your thoughts or share your experiences by commenting below.