How young is too young for photography

Meet Evan, my grandson, a precocious three year old. As you can see, he is quite comfortable being in front of the camera. I guess when you are born into the family of a photographer you come to accept having a camera in your face as normal. 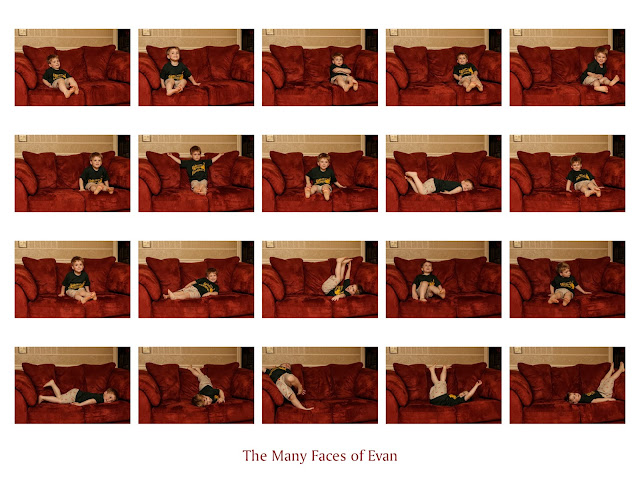 As you can see, he is quite the ham. Every time I point the camera at him he'll look into the lens and say "cheese". He is also fond of pressing the buttons on the back of the camera. At first it was just the fun of pressing buttons. As he became aware that the buttons actually do something he got a kick out of the preview button and the live view button. Trust me, he knows the difference.

One day I decided to bring the camera so I can get photos of his new baby brother. If I got lucky I wanted a photo of the two together. Unfortunately that wasn't to be. Baby Bryce didn't want to cooperate and Evan wanted to hog the camera. It was time to switch gears.

I had set up my camera on a tripod with a wired shutter release on 10 second delay. I then showed Evan how to operate the shutter release and instructed him on how to do a self portrait. Needless to say, this kept him entertained for a good hour and a half.

He would click the shutter, run to the couch, pose and wait for the sound of the shutter. Once he heard the shutter click he would run back, press the preview button and do the whole procedure over again. and again, and again...

My wife and I got a kick out of watching the various expressions and poses he attempted to do. Most of what you see in the photo above is his imagination. The only suggestions we gave him was to, "try a different pose."

We were really surprised at how well he handled the equipment. My step daughter had given me a look as if I was crazy to let a three year old have access to my camera. I guess I had more faith in his abilities. I was also right there to guide him and prevent any mishaps.

I guess now I know what to get him for Christmas. Only it will be a kid's version.