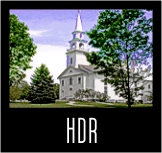 HDR, or high dynamic range, photography has been growing in leaps and bounds lately. Even though the process has been around for years it was usually done manually in higher end programs like PhotoShop®. Now there are programs that are specifically designed for this process, including HDR specific modules in PhotoShop®.

The process extends the dynamic range (the range from light to dark) in a scene far beyond what the camera can capture in a single image. This is done by combining two or more images taken at different exposure levels and combined in such a way that the shadows and light areas don't get lost. This requires the photographer to take multiple shots at various exposures. If your camera allows exposure bracketing you will need to learn how to set this function in order to get the required images for HDR.

While most higher end 'pro-sumer' cameras can bracket three exposures a fewer number can bracket five or more exposures. The answer to obtaining more exposures lie in one of two methods, depending on what is easier or available to you at any given time.
The first method requires you to shoot in RAW.

Bracket and shoot your three exposures according to your camera's settings. The bracket range should be a full two stops up and down with one caveat; Digital camera sensors are better at handling shadow areas than they are at handling light areas. You need to allow for this in your bracketing by compensating your exposure for the light areas of your image. Most cameras allow you to do an exposure shift when setting up for a bracketed shot. Check your manual on how to do this. 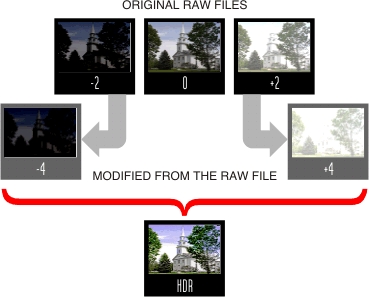 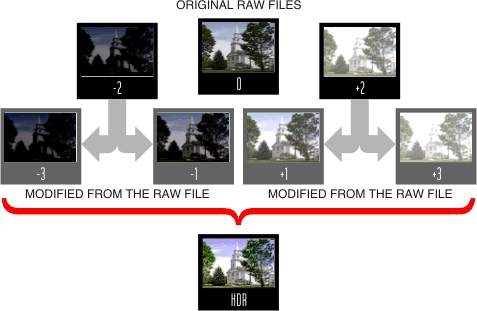 Next, being careful not to move the camera, change your exposure to underexpose the scene a full three stops (-3Ev). Take another set of bracketed exposures. The results will be a -4Ev, -3Ev and -2Ev range. Then do the same thing on the plus side, overexposing by three stops. You will now get a +2Ev, +3Ev and +4Ev range. Depending on your scene some of these images will be grossly overexposed. Remember digital sensors are more sensitive to the light side. In the end you will have an exposure range of -4 to +4 in one stop increments all shot in RAW. 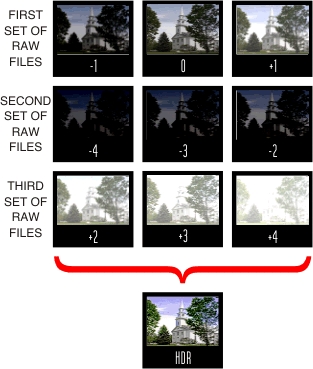 One final note to all this is that you have to be aware of your scene and how it is lit. HDR is used to expand the exposure range of a scene (dynamic range) that the camera, by itself, can't capture. If there is a lot of shadow or darkness in your scene you will need to compensate for that darkness. Likewise if your scene is overly lit with a lot of high contrast you will need to be aware of how the light and dark areas interact. HDR works best for scenes that are evenly lit from light to dark without a lot of heavy contrast.

The example above is a simplified illustration to give you a basic understanding of the processes. As you gain experience you will tune your shooting style to your needs and to the scene in particular.