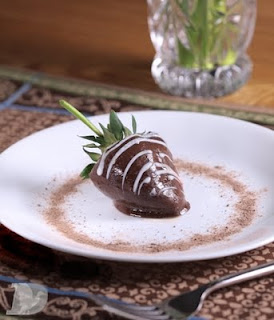 As I mentioned in an earlier post, my photography experience is mostly in commercial product photography. I find it challenging and exciting. Yeah, I know some of you are shaking your heads at me.

However, my involvement with several area photography groups has afforded me the opportunity to expand my repertoire into other areas that I haven't visited since I was younger. It's good to exercise all the muscles. Yet occasionally I feel the need to go back to shooting products, but want to continue pushing myself outside of my usual. So how about shooting food?

I was at my local supermarket the other day and I came across a package of chocolate covered strawberries in the bakery section. I sifted through the packages until I found one that contained some fairly useable berries that looked good enough to shoot. They were not perfect, and in a client shot they would never have even been considered, but as an exercise I thought they would do. Besides, I knew where they would be ending up after the shoot. Hmm, tasty!

I cleared off my table, set out a place setting, moving items around until I found a pleasing composition then introduced the product. If you analyze the composition closely you will see that if you were actually sitting at the table with the plate in front of you, the fork is not in a natural position. Keep in mind that we are not reproducing reality but rather emphasizing the ideal. We are presenting the essence of the strawberry as best we can using a flat, two dimensional medium where the viewer can not touch, taste or smell what they are seeing. Therefore the image needs to be more alluring visually to compensate for the missing senses.

The other thing I see that I am not really happy with is the shadow of the strawberry on the left side of the plate. I used some small mirrors to try to eliminate the shadow and I should have put a little more effort into it. However, my mind was constantly telling me that this was only an exercise and did not really count. Before you start yelling at me that I shouldn't drop my standards just because the shot is an exercise, I will tell you up front that I am acknowledging this up front. I know I got lazy. 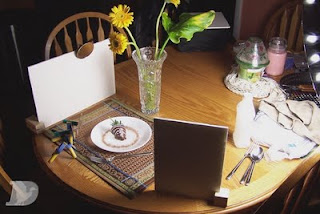 Here is a shot of the setup. As you can see, the table is cluttered with other stuff that tends to collect during the day. Some mail and a magazine, the kitchen towel, the candle centerpiece my wife likes to set out, etc. You can also see a vase with some flowers my wife brought home a few days ago. I was originally playing with the idea of including a flower in the shot but the flowers were too big. No matter where I place flower it seemed too large and overpowered the berry. That just goes to show that sometimes the image in your head just doesn't work in real life.

You can also see how I used white foam core to bounce light back onto the product. The one in the rear threw some of the light back onto the shadow side of the berry. The one to the right of the plate did several things. Primarily it threw some nice highlights onto the side of the fork. If you have worked with shiny steel then you know how troublesome it can often be. The second thing it did was to act as a flag, reducing spill light from hitting the lens. What you can't see is that my camera is just past the bottom left corner so that the light placement caused the light to point slightly toward the camera.

I also used several small mirrors to help kill some of the harder shadows cast by the main light. There are four of them in this view. Two on the table front left of the plate and held by small 'A' clamps and one is hanging on the white reflector. As I mentioned, I should have played around with the mirrors to eliminate the rest of that shadow.

The final shot was captured with my Canon 40d and 100mm prime lens, f/4 at 1/20th of a second, ISO 100. It's an easy setup. Get yourself a few items and try it yourself. You'll be amazed at the results you can get.