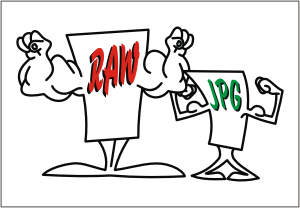 It seems that this argument can be found on nearly every blog about photography. While it has been argued to no end, here is my take on the subject.

Shooting in RAW has many advantages over JPEG as it records far more image information than a JPEG image ever can. Understanding that, it makes sense to shoot in RAW all the time. If you need a JPEG (or any other image format for that matter) you can very easily convert the RAW file to the needed format. The same can not be said about going the other way; you can't create a RAW file from a JPEG.

The only downside to shooting RAW is in the write speed of some cameras. Being a larger file it takes a little longer to write the image file to the flash card. While it boils down to a difference of just a few milliseconds, when you need to shoot fast, this delay can work against you. So if you absolutely must shoot for speed, shoot in JPEG. Just remember your post editing abilities will be narrowed to the RGB editing controls.

Which leads me to another argument I've heard people mention about why they don't shoot RAW. "I really don't know how to use those 'high-end' editing programs that edit RAW."

While your editing abilities may be lacking right now, they will get better. It is not unusual for photographers to revisit older work as their skill level advances. That image you thought was not salvageable yesterday can be a diamond in the rough tomorrow. Which reminds me of a little tip I learned a long time ago and that is to not delete unwanted images.

"But they take up so much room," some may argue. Yes, it is true that RAW files are significantly larger than a JPEG file. However, my rebuttal to this is that all image files take up room. If you are going to be a serious photographer you will need to invest in some form of data backup system. These systems are becoming less and less expensive, so having to keep a few 'unwanted' images in storage should not be an excuse.

So overall what is the verdict?
PROS:
CONS:
In my opinion, the pros far outweigh the cons. Looking back at some of my earlier shots taken in JPEG I wish I had the RAW files available for editing. Knowing what I know now, I could have easily saved many of them. Live and learn, so shoot RAW and save yourself some future regrets.